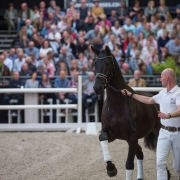 DEN HOUT – Tonight the sixth Van Olst Sales took place at the accommodation of Gertjan and Anne van Olst. There were 30 horses, most of them recently broken in, under the hammer that raised an average of €34,000.

The auction offered a strong collection. The prices prove that people were also willing to pay for this quality. No fewer than eight horses were sold above €40,000. The horse that received the most bids was the black Loverdale W (Glamourdale x UB40). This full brother of the NRPS-approved stallion Gladiator is leaving for € 210,000 to a dressage stable in the Czech Republic. Gertjan about the auction topper: “It is an exceptional amount for a three-year-old. But it is also an exceptional horse. We are therefore very happy that our regular customers have been able to buy it. In general, we can say that the good quality was well paid.” 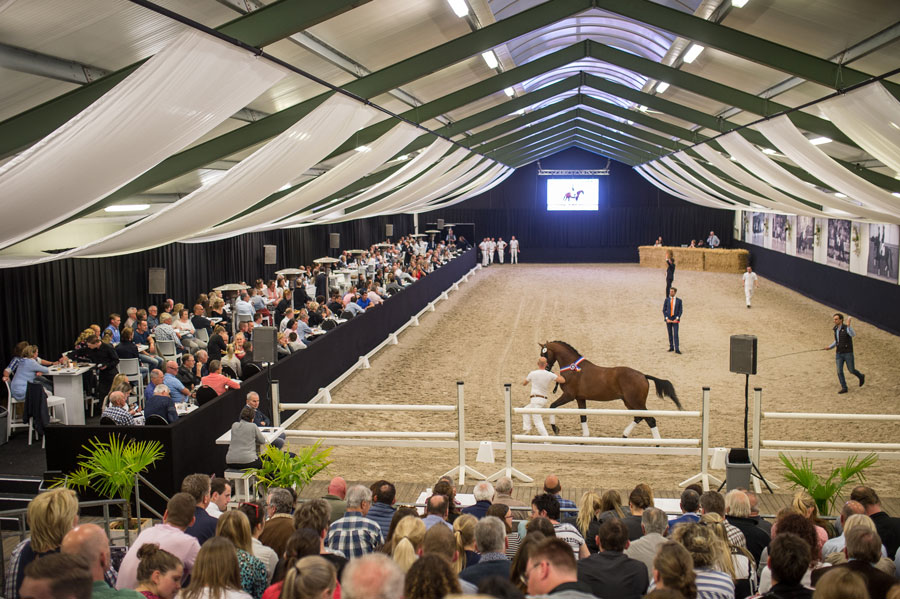 Lots of atmosphere in the Van Olst Sales auction arena.

The wild card that joined the collection two weeks before the auction, turned out to be a good move. The stallion of Fürst Romancier named Fürst Romantico, who has already been competing at Intermediair I level, is also leaving for the Czech Republic for € 145,000. 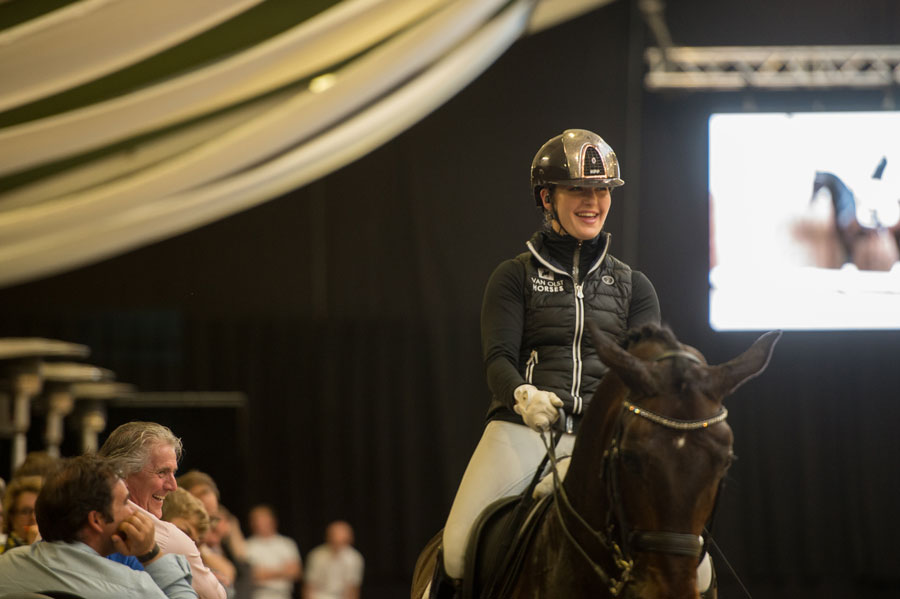 Franka Loos presents wildcard Fürst Romantico to the audience and was sold for €145.000.

Charity
The first auction piece, a cover of world champion Glamourdale, was auctioned for charity. Bidders in the crowded grandstands and VIP area raised a nice €1,700 for the Brooke Hospital for Animals Netherlands foundation. 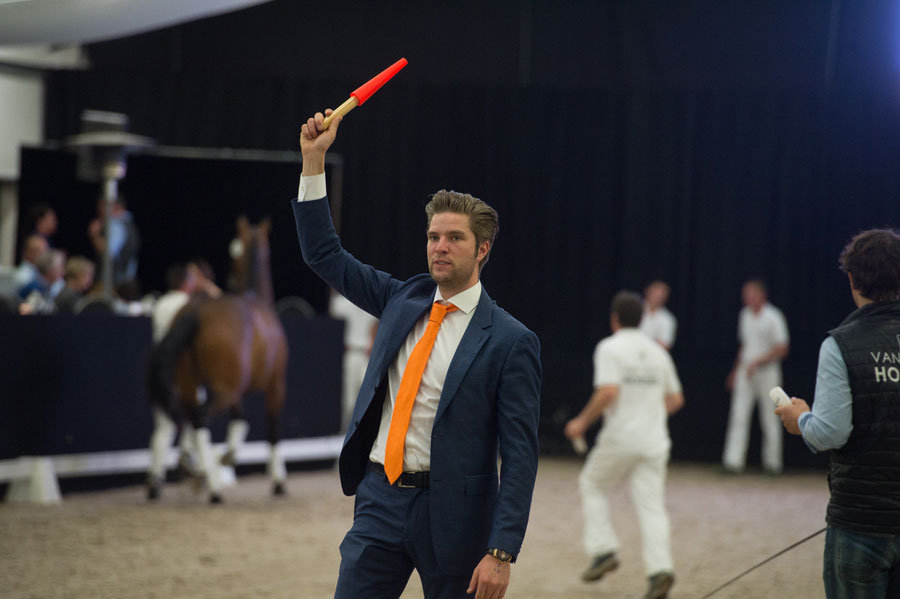 Lars Pronk had a busy evening because of the many bids. 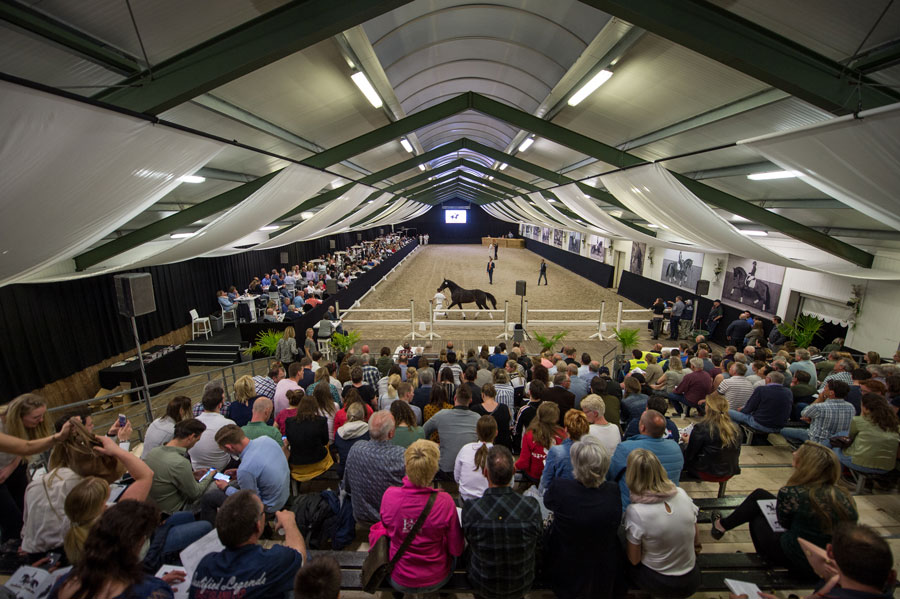 Stallion show
A number of the horses auctioned tonight will give an appearance this Sunday during the annual stallion show. It starts at 3 P.M. and admission is free. 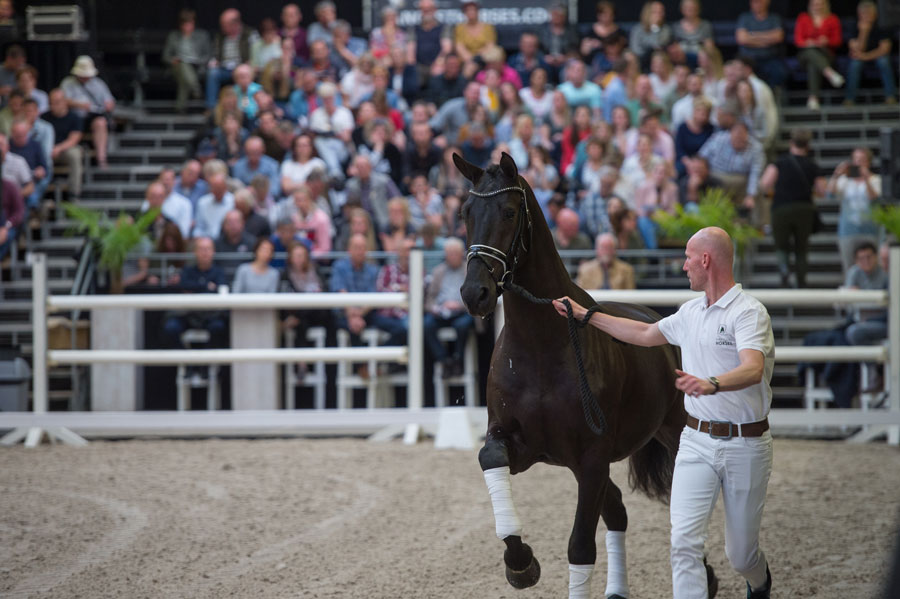 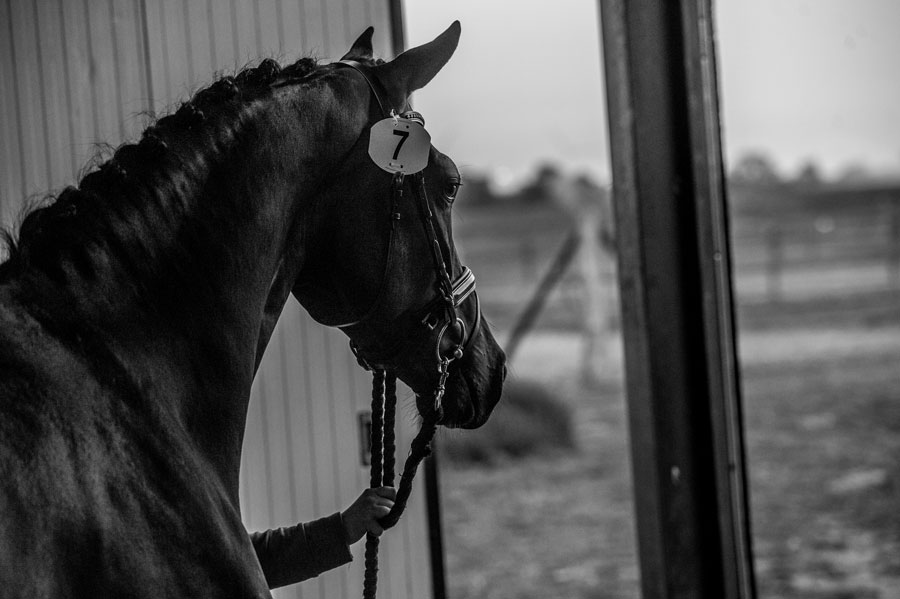 Lucky Star (Everdale x Sonique) is waiting for his turn to go enter the auction arena. 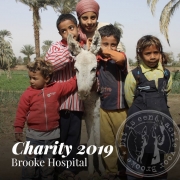 A good cause is selected every year by Van Van Olst Sales. This year too, an incredibly beautiful goal has been chosen.

This year’s donation will be donated to the Brooke Hospital, because unfortunately not all horses have the luxury of a good life. Before the more than 30 ridden dressage horses will be auctioned, a coverage of Glamourdale (Lord Leatherdale x Negro) will be sold as the first auction item. The FEI world champion seven-year-olds is working hard on the road and his offspring are also performing great. The entire proceeds from this first auction item will be donated to Brooke Hospital.

Brooke Hospital In several countries including Egypt and India, horses, donkeys and mules are used as work objects for the very poorest. The circumstances are extremely poor due to lack of knowledge and poverty. The Brooke Hospital for Animals Netherlands Foundation brings these situations to light in the Netherlands. By providing information to the local residents and free medical assistance from local veterinarians, the foundation tries to improve the welfare of the animals. More than 160,000 animals have been helped, but this is only a small part. To continue this work, donors are more than welcome.

Next Friday there will be a presentation at 3 p.m.
The auction will start later in the day, at 7:30 PM. 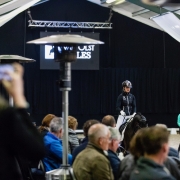 DEN HOUT – Tonight the horse company of Gertjan and Anne van Olst was the setting for the presentation of the auction collection of the Van Olst Sales. The 34 talented ridden dressage horses, mostly from their own stallions, were presented under the man. A large number of people from home and abroad traveled to Den Hout to view the auction horses with their own eyes.

Gertjan about the evening: “I am really proud of what we have achieved as a team. Not just tonight, but since we started training this collection. The horses showed themselves well. That is nice to see since most of them have not been under the saddle for that long and the entourage was impressive. ”

The high-quality horses also attracted many foreign interested parties to the presentation evening. The owner of Van Olst Horses says about this: “It gives great confidence that our foreign customers were also present this evening. You see that it is becoming increasingly difficult to find a good young dressage horse. An auction like this is ideal. There will be a presentation on Friday. In the evening we will see how interested people are. That is exciting every year. ” 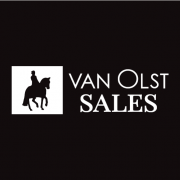 Van Olst Sales will show you the high-quality collection 2019. A large part of the collection will be presented under saddle, but a few genetically very interesting mares will also be shown.
Of course, our wildcard Fürst Romantico is also included in this presentation.

On Friday, April 19, a presentation will also take place at 3 p.m. before the start of the auction.
The auction starts on Friday evening at 7.30 pm! 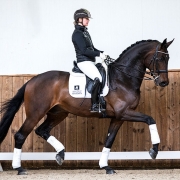 Today we have added the 9-year-old stallion Fürst Romantico (Fürst Romancier x Sir Donnerhall I) to our auction collection!

Super interesting: Intermediar I has already started and shows a lot of talent for piaffe and passage. View this beauty on our website. 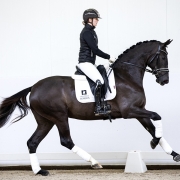 TURNHOUT – Last weekend Van Olst Horses traveled to Turnhout, Belgium with eight mares. Here the mares were subjected to the KWPN IBOP test. The mares, all of which are part of next week’s auction collection, have passed the test. These predominantly 3-year-old mares were all declared ‘ste’ with great points last March and can now also add a sufficient IBOP test.

These three-year-old mares presented themselves well by our riders Franka Loos and Benjamin Maljaars. Future owners are already very close to an elite / keur mare which is a good start for breeding. These mares are also all WFFS-free.

The Van Olst Sales will take place on Friday 19 April. More than 30 young are auctioned during this auction. To make the collection even more interesting, Gertjan van Olst has decided to let these mares, including one of their own breeding products, participate in the IBOP test.

‘Voorlopig keur’ mares
During the IBOP test, the mares are assessed for components such as attitude and rideability. “Many customers who purchase a young mare eventually want to run an IBOP test but find it difficult to arrange. For this reason we want to offer mares at the auction that have already passed the IBOP test and are therefore “voorlopig keur'”, says Gertjan van Olst.

Glamourdale daughters
An outlier during the IBOP test was the Glamourdale daughter Linda S. With a total of 80.5 points and several 8s for, among other things, her walk and trot and an 8.5 for the canter, the dark brown mare is flagged and penned by the IBOP test come. In combination with the interesting bloodline and great rideability, this young talent is also very interesting for breeding and sport.

Do you want to see the scores of these and all other mares? Click here. 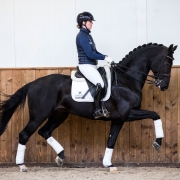 The seven-year NRPS approved Crosby (Chippendale x Flemmingh) was the top seller at the Van Olst Sales 2018 with 270,000 euros. Bred by Th. Deenen from Heijen, the performance topper at the NRPS in 2015 and fourth in the Pavo Cup for six-year-olds last year, will stay in the Netherlands for that amount.

Gertjan van Olst is satisfied with the auction, which he organized for the fourth time this year. “This edition was again successful: a lot of interest, an international buyer public and the bidding was quick.”.”

A substantial sum was also deposited for a three-year-old gelding from the first volume of Glamourdale. This King Kong (Glamourdale x Negro), inbred to Negro, goes to Australia for 95,000 euros. The five-year NRPS stallion Nagano (Negro x Lord Leatherdale) also goes there. He was repulsed for 75,000 euros.

50,000 euros was offered by Danes for the three-year-old stallion Primo-V (Nespresso x Lord Of Loxley), who remained at the NRPS. The three-year-old gelding Kojak PB (Glamourdale x Jazz) goes to Chile for 38,000 euros.

The KWPN-approved Inverness (by Everdale) by Gertjan van Olst and Robert Lickley, which by the way was never available with fresh semen, also belonged to the collection. This stallion registered with the KWPN with 81.5 points was withdrawn and is therefore not sold. 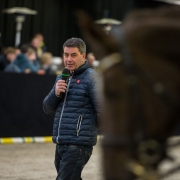 DEN HOUT – The Van Olst Sales presentation took place last night. The auction horses were presented ridden. Although some young horses were sometimes impressed by the entourage, they showed themselves really well. What was striking was the unprecedented quality of the young dressage talents and the amount of approved stallions. There are no fewer than seven, including the 2016 KWPN approved stallion Inverness.

Gertjan van Olst about the evening: “We notice that more customers come to the presentation every year. We are of course happy with that. Also tonight it was busy and everyone kept watching carefully until the end. Great!” The collection has many modern sport horses from proven strains. The presentation started at 7:30 PM and ended three hours later.

The evening was opened by the more experienced horses Crosby and Denzel Washington. They were presented by Franka Loos and Benjamin Maljaars respectively. Other stable riders from that acte attended were Charlotte Fry, Juan Rodriguez and Joanna Riyberg. After a short introduction by Bert de Ruiter, Gertjan van Olst commented on all horses and provided all those present with background information. Because almost all horses come from their own rearing or breeding, there is a lot of knowledge about the horses.

The evening offered potential buyers a lot of hope for the future. Who will soon be allowed to take which horse home will be seen tomorrow. The extra presentation starts at 3 p.m., followed by the auction that will start at 7:30 p.m. 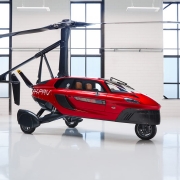 The Van Olst Sales will take place this Friday at 7:30 PM. Thirty-seven horses will come under the hammer, including the wildcards added today. But that is not the only thing; in support of ParaPaard, part of Fonds Gehandicaptenfonds, a flight is auctioned in a flying car!

This incredibly spectacular auction item is made available by the company behind the world’s first flying car: Pal-V from Raamsdonksveer. Besides that the Pal-V can reach a maximum speed of 160 km / h on the road, it can also fly for more than 4 hours in a row.

The one with the highest bid experiences as one of the first an amazing flight in the Pal-V. The flight is part of a fully catered day including an exclusive meet and greet and a snack and drink.

The opening bid will be € 750. Bidders contribute to making equestrian sport possible for people with disabilities in the Netherlands.

Pal-V
More information about the Pal-V 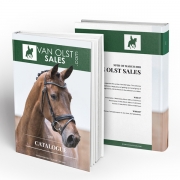 The catalog for our collection from 2018 has just been sent to the printer.

Do you want to receive the auction catalog designed by Newmore? Then send us an email. View the digital version below.