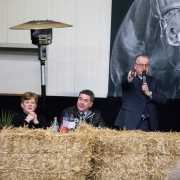 Last Saturday the annual fall auction of Van Olst Sales was organized again. About 25 young horses went under the hammer. Kayenne M, a daughter of Glamourdale, raised 35,000 euros and was the auction topper of the evening.

The auction consisted mainly of 2.5-year-old gelding. In addition, a number of 2.5-year-old mares went under the hammer. All young horses in the collection are descended from Van Olst stallions. The star prok mare Cilenka K (by Lord Leatherdale) was also sold on Saturday. The mare, in foal to Painted Black, changed ownership for 20,000 euros. She will be leaving one of the coming days for her new home in California.

The young and unbroken horses raised an average of around 14,000 euros. Kayenne M, however, was the outlier: 35,000 euros were paid for the beautiful Glamourdale daughter. Glamourdale was the most popular KWPN dressage stallion in 2015. His coverages in 2015 yielded 243 foals in 2016.

After this successful edition of the autumn auction, you can look forward to the annual spring auction. The collection for that is already ready: the emphasis will be on ridden horses.